What Is The CPI?

The consumer price index (CPI) is a price metric for a market basket of goods and services purchased by US households at a specific point in time. Changes to the CPI are widely used in the US and other countries as measures of price inflation. Along with population growth over time, the trends in CPI are closely watched by national governments throughout the world as critical inputs for economic policy. Positive price inflation decreases our purchasing power for a market basket of goods and services over time while negative price inflation increases that purchasing power. One of the primary charges for the Federal Open Market Committee (FOMC) is to promote price stability. Although a constant measure of CPI ensures price stability, that is rarely optimal for a properly functioning economy and financial marketplace. When prices are dropping (or expected to drop) for goods and services, consumers have an incentive to wait for a lower price in the future. On the flip side - when prices are increasing dramatically, the human reaction is to panic and buy too much too fast (think of toilet paper last year). There is often a happy medium of positive CPI growth that roughly parallels wage growth and population growth. This tends to fall in the low single digits in percentage terms per year for developed economies of a complete market cycle.

When we think about too much inflation or too little inflation there arises an important concept called elasticity. This term comes from the idea that a rubber band that is highly elastic takes very little force to dramatically change length. Conversely, a highly inelastic rubber band has a relatively small change to its length with the same amount of force. This parallels what happens to demand for products and services with changes to prices. Some things (think food and energy) are highly inelastic because people still need to eat and cool/heat their homes with potentially large price increases over a short period of time. Conversely, other things in the market basket (think luxury goods or lavish vacations) can be delayed - or even skipped - when inflation rears its ugly head. This is the reason that many economists look more carefully at the "core" CPI trend that strips out the volatile (and inelastic) portions of the market basket.

While the CPI tracks changes in the price level of a market basket representing goods and services purchased by consumers, the producer price index (PPI) measures inputs to these goods and services purchased further "upstream" in the production cycle. There are several differences to the way PPI is calculated when compared to the CPI values. The first major difference is that CPI data includes imported goods (and services) in calculating the market price of the basket. PPI only considers domestic production of the inputs purchased for the end goods. A second difference is that CPI measures include the end cost to consumers of sales and excise taxes. These can vary dramatically over time and also depend on country of origin (for imports). A side effect of these differences is that PPI trends are less volatile than CPI trends as the input prices are further "upstream" from the whims of consumer demand. Because the PPI is much more of a leading indicator, it may be a better predictor of consumer inflation than the CPI numbers.

What Is The History?

Stock, Bonds, Bills, and Inflation (SBBI) is the gold standard for monthly data used by investment advisors. The original publisher - Ibbotson & Associates - was acquired by  Morningstar, Inc. in 2006 after which much of the information has been released in a digital format on a monthly basis. Since January 1926, the average monthly CPI increase has been 0.24% through the end of April 2021. Reducing the sampling frequency gives us an annualized average of 2.93% through the end of 2020. During this period, 15.5% of the months showed negative CPI growth (deflationary) and only 10 of these 95 years were recorded as deflationary. Most of  those years were concentrated just prior to and just after the market crash of 1929. The following chart highlights the monthly changes in CPI over the period January 1926 to May 2021. 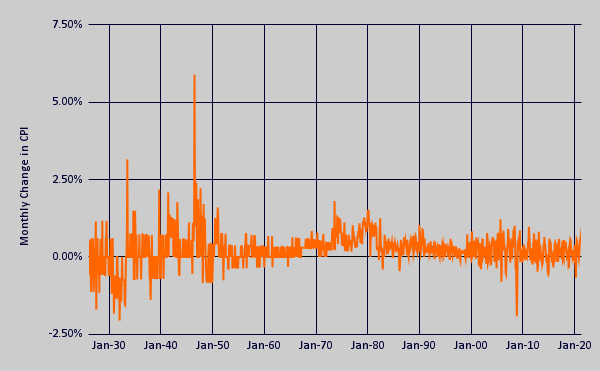 Speaking of markets, the arithmetic average of US large cap stock returns from 1926 through 2020 was 12.2% per year - a healthy arithmetic average gap over inflation of 9.22% per year.  When the rumor mill starts spitting out concerns for inflation, there is often a flight to safety by investing in cash, short term treasuries, or high quality bonds. One way to look at market cycles is to estimate the effects by taking rolling 10-year averages. Using this smoothing effect, a cash investment (13-week Treasury Bills) beat inflation by an average of 0.19%. The maximum cash beat was +4.44% from 1926 to 1935 and the minimum cash cushion over inflation was (negative) -5.50% from 1941 to 1950. The only asset class published in the SBBI that never lost purchasing power to inflation using this 10-year rolling average proxy for market cycles was small stocks as shown in the table below. 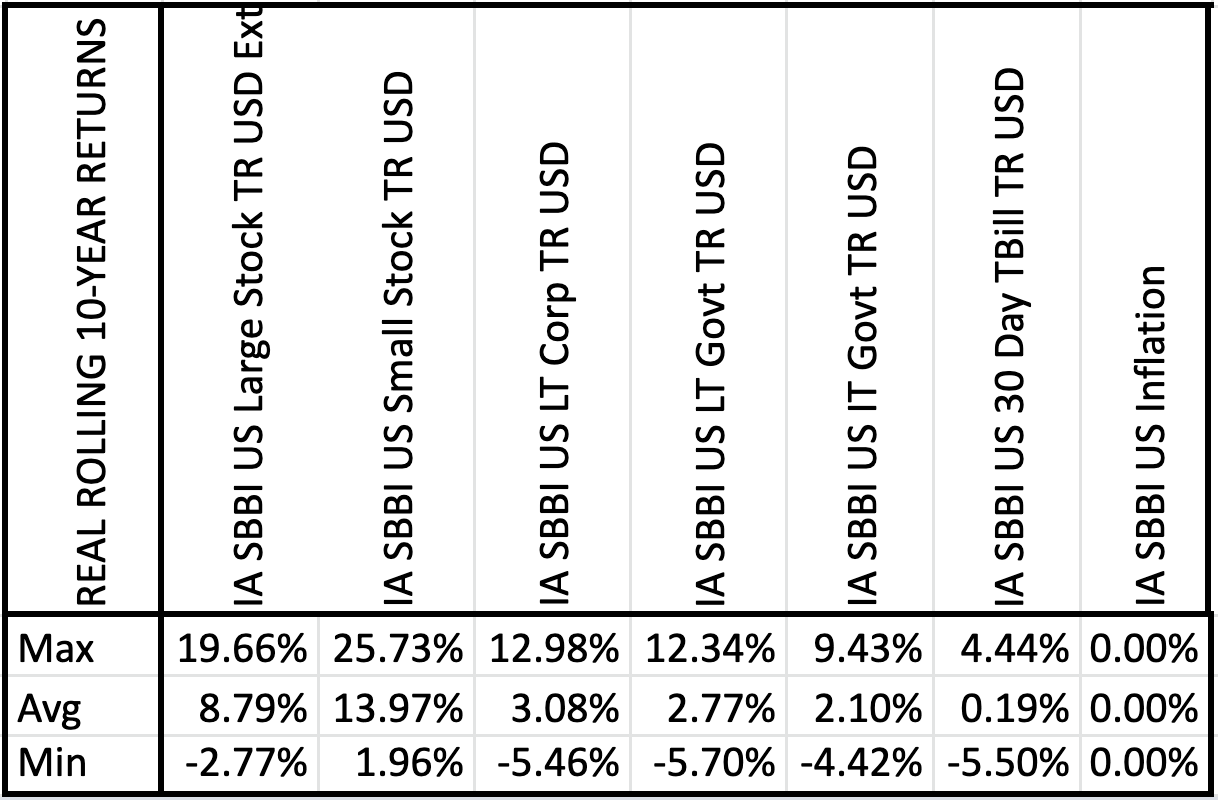 The CPI rose 0.9% from May to June. This is much higher than the 0.6% increase between April and May. On an annualized basis, the end of June reading represents a 5.4% growth - again an acceleration from the 5.0% number posted for inflation at the end of May. These values are the highest seen since the middle of the financial crisis in 2008. After excluding the volatile energy and food contributions, core CPI came in at "only" 4.5% year over year. The surprise here is that number is the highest since 1991, according to Reuters. The PPI estimates generally lead CPI trends by roughly a couple-ish months based on the average production cycle for hard goods.

The total PPI came in at a 1.0% change from May to June and the core PPI registered a less alarming 0.5% change month over month. It should be noted that most gauges of economic activity that are compiled on a monthly basis are "seasonally adjusted" in an attempt to provide a more consistent comparison. This adjustment process is as much art as it is science and may not always reflect reliable longer term trends. The annual figures for total and core PPI registered 7.3% and 5.3%, respectively. These represent much larger inflation than historical trends and above the current FOMC target rate. It will be interesting to see if these readings are transitory in nature or a sign of pricing pressures that require urgent action on the part of the FOMC.

What Should I Do?

In a word: nothing. In a few words: probably nothing different. In several words: probably nothing different from what your investment advisor is currently recommending for your specific situation. The most important consideration is to take an accurate gauge of your personal risk tolerance. Investing up to (but not beyond) that level of expected risk is the key to creating and adhering to a solid investment strategy over a complete market cycle. Here are several general guidelines to help mitigate the risk of reduced spending power due to increased inflation rates.